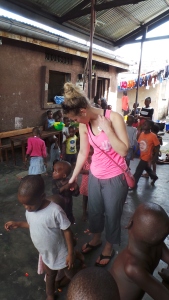 There are a lot of things I like about working in international adoption.

I like the families who I am able to work with.

I like the complexities, that no two days are exactly the same.

I like the challenge of never knowing exactly how something will work out.

I like that I am able to advocate for vulnerable children.

I like that I’m able to be part of a story much bigger than my own.

But my favorite thing about my job is that every day I’m reminded of the Gospel, the good news that God sought me out, paid my debt, welcomed me into His family and that He loves me. Perfectly.

In April, I traveled to Congo on an escort trip. So what does that mean? An escort trip is when members of our staff travel to the country on the family’s behalf to bring the children home.

There are some important things you need to know about adoptions from the Congo.

Starting in September 2013, children, even children who have been legally adopted have been stuck in the Congo. For over two years, they’ve remained in orphanages or foster homes because the Congolese immigration authority would not issue these children exit permits to leave the country.

So for over two years, our Congo Program families have been paying a monthly fee (kind of like a day care fee, but for diapers, food, and care) for their adopted children, waiting for the Congolese immigration authority to let them come home.

Since Congo is a very impoverished country in Africa, these sweet children were daily susceptible to malaria and other diseases. In addition to the financial burden, these families have suffered the emotional burden of knowing their children, seeing their photos, but being unable to raise them, in the family’s home. Families in our Congo Program have demonstrated to me over the past two years what it means for love to suffer long.

When the opportunity to travel to Congo presented itself, I wasted no time in saying, “Um, OF COURSE I’ll go.” The country itself has been a mystery to me, and the entire continent of Africa has long been on my bucket list. What I didn’t realize in volunteering for the trip is how God was going to give me the clearest picture of the Gospel I’ve ever experienced.

I could say a million things about traveling with two toddlers who didn’t speak English, who had never seen escalators before and who really had no idea what they were about to experience, but those are stories for another day.

At the end of our thirty-six hour trip, we passed through customs and immigration and took the airport monorail to the baggage claim area in the Cincinnati airport. I walked hand in hand with my two little friends as their parents came into my sight. I’d like to be able to say that the tears running down my face were relief that we had made it or joy that I could see my own mom who came to greet me at the airport, but truly, the tears were because these children were now home.

After thousands of dollars on top of an already expensive process.

After months of update photos instead of seeing their faces each morning.

After uncertainty of when this ridiculousness would finally end.

After knowing another woman was wiping the tears and calming the fears.

They were now home in their parents’ arms.

I quickly stepped aside to hug my own mom and give the families time to celebrate their special moments, so I don’t know exactly what was said in each hug huddle. But, if I had to imagine, it was probably something like this: I love you, welcome home.

And that right there is the Gospel. It is God saying to each of His beloved: There is no distance too far, no time too long, no cost too great to separate you from my enduring, everlasting, all powerful love. Here with me is where you’re meant to be.

I imagine that when the Lord greets us in heaven, we will hear from Him, “I love you, welcome home.”