Growing up with a sister close in age to me, I always had some one to compete with. Even though we had different teachers, we had similar strengths and played the same sports. There was no getting away from sibling rivalry in our home. It always felt as though we were competing with and being compared to one another.

To this day, I still immediate engage in competition, small things and big things alike. If there’s a chance to win, it’s game on. The Gatorade commercial where Mia Hamm and Michael Jordan are taunting each other singing, “Anything you can do, I can do better; anything you can do I’m better than you,” can sometimes be the soundtrack to my life. The automatic ON switch in my brain has become detrimental to me. My mind creates competitions in things that should never involve comparison.

The desire to compete comes from a place deep in my heart that longs to believe that she is enough. Good enough, beautiful enough, smart enough, holy enough. It’s as if winning, even at trivial matters, is an indication that I am enough. It’s a cry deep within my soul to be known, fed by insecurities of inadequacy and insufficiency. These insecurities drive me to compete with other people, keeping track of their failures and shortcomings, somehow believing that if I can be better than them, then I can prove myself as enough. My own insecurities and sin tendencies paint a picture in my head of me standing before Jesus and saying, “But at least I was better than her.” The constant competition operates out of a desire to prove something, perhaps even hoping to prove myself.

But scripture tells me that my worst fears are confirmed. On my own I cannot win. Instead, I am worthy because of Jesus’ life and sacrifice, because of His grace. It’s not about my own abilities or my being better than someone else, but the sufficiency of Christ. On my own, I’ll never win, I am the worst of sinners, but in Christ I am victorious. Because of Christ, I am enough. In Christ, I can stop competing; it has already been achieved in full. I cannot add to Jesus’ sacrifice on the cross.

Because of grace, I can stop competing because there was never a competition to begin with. 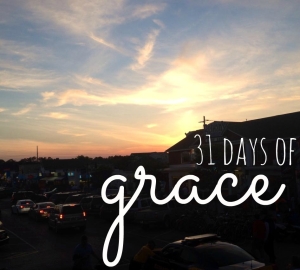